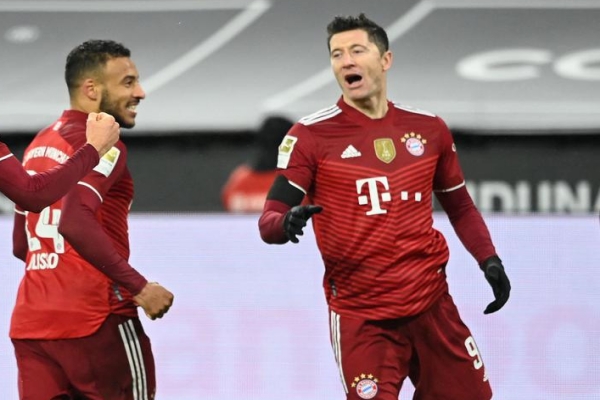 Julian Brandt had opened the scoring in the fifth minute only for Lewandowski to hit back almost immediately.

Kingsley Coman’s effort then found the net, but Erling Haaland levelled soon after the break.

Lewandowski’s winning goal was from the penalty spot after referee Felix Zwayer and VAR adjudged Mats Hummels’ handball in the box to have been deliberate. This decision saw Dortmund head coach Marco Rose sent to the stands for his furious reaction, after having watched his team match Bayern for 80 minutes in an exciting, evenly matched, yet error-strewn game. Dortmund’s boss wanted a penalty in the first half for a clear handball on Alphonso Davies in the box and for a foul against Reus in the second, but his protests were not only ignored, but he was sent off to the stands for arguing with the referee.

Lewandowski’s goal was his 66th in 55 games in 2021 and his 118th away from home in the Bundesliga, the most in the competition’s history.

The game was very exciting with a lot of fast movement and sharp attacks that were mostly caused by series of defensive mistakes on both sides up until 65th minute, when Brandt and Upamecano had head collision leaving the Dortmund player on the ground and in need of substitution.

Brandt left the field on a stretcher and was taken to a local hospital. The BVB released a statement saying that the 25-year-old was “doing well under the circumstances”.

The 10 minutes of medical care killed the tempo of the game and the last half a hour both teams were less aggressive.

This was seventh consecutive victory in ” Der Klassiker “, as Bayern scored 3 goals for the third time in a row at Dortmund stadium. The battle at the top of the Bundesliga ended with the success of the team of Julian Nagelsman and already has a 4-point lead over Borussia.

Next game is Champions League one against Barcelona on Wednesday, fallowed by Bundesliga clash with Mainz at Allianz Arena on Sunday.