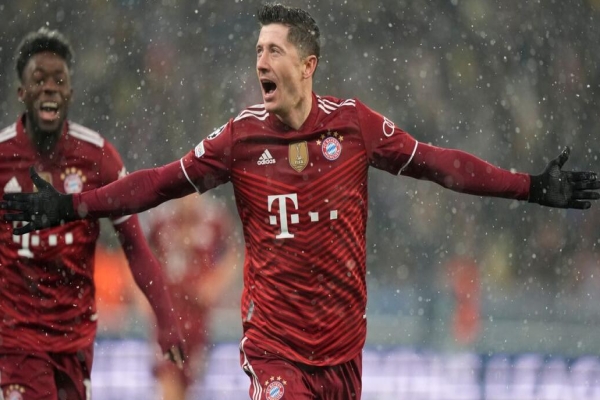 After qualifying for the Knockout phase last week, tonight Bayern confirmed its top position in Group E. A few weeks after the crushing 5-0 victory over Dynamo Kiev at home, the Julian Nagelsmann’s boys repeated the exercise on Ukrainian soil. The victory this time was with a result of 1-2. The Bavarian machine secured the necessary lead before the break, when it was already leading with two goals.

Under the heavy snowfall at the Olympic Stadium in Kiev, Bayern took the lead in the 13th minute. Robert Lewandowski added another unique goal in his glamorous career after punishing a poorly cleared ball from the Ukrainian defense with a bicycle kick finish.

In the 41st minute the Germans went on a fast attack run in which Mueller cleverly skipped a pass from Tolisso that went to Kingsley Coman, who from a small angle did not make a mistake for 0-2.

Reassured by their comfortable lead, the guests slightly reduced the speed of their performance. This turned out to be an excellent moment for the star of Dynamo Mykola Shaparenko, who showed his exceptional qualities. Twice he was close to scoring in the 48th minute, but never found a way to the net of the confident Neuer. His persistence still paid off and Dynamo reduced the lead in the 70th minute. The attacking midfielder gave the basis for good attack, in which Tsygankov found Denys Harmash in the penalty area and he scored for 1-2 with a powerful shot.

In the last minutes the drama was complete and Bayern got away with the win. Tsygankov made a fierce shot from the edge of the penalty area, but fortunately the ball hit the right crossbar.

In the last round, in a game of no importance for Bayern, they hosts Barcelona, while Dynamo will visit Benfica.